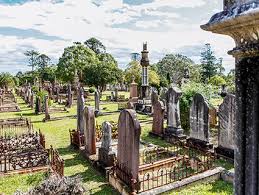 Ned continues his tour of a small but crowded workingman’s cemetery once servicing the northern coalfields and unearths..Nerida Louise Humphries.

Nerida Humphries’ husband, a suburban solicitor, left her after twenty years of marriage to relocate to an adjoining suburb with his secretary of one year. Nerida experienced relief as she had been wrestling with the question of how to tell Robert she was leaving him without hurting his feelings. She also thought, thinking of his secretary, be careful what you wish for, Robert. In the event, she took Robert, as the expression goes, to the cleaners, although suburban soliciting did not, in the final washup, provide pockets as deep and as full as Nerida had assumed. She walked out of mediation with sufficient to purchase a near-new Volkswagen kombi, a second hand potting wheel and furnace, and a run-down miners cottage in a dying village.

Nerida had dabbled in clay pottery whilst on marital duty, a commitment which included the raising of three less than gifted, egotistical children. Freed, discovering to her delight that her creativity would not be constrained by potting orthodoxy, she stumbled into the realm of what she was to term organic sculptural pottery, and there set up shop. Her pots, if that was what they were, ballooned in size, colour, and organic complexity, and, the artist would freely admit, uselessness. But they looked interesting. Almost alive, some said.

In 1985, a latecoming resident, newly subscribed to The Pit Progress Association, keen to demonstrate commitment to progressive action, Nerida proposed that The Association seek heritage classification for The Pit as “an historic mining village”. Word spread quickly. Within twenty four hours the proposal – seconded by another late blow-in, Herbert Hobbs, son of the fondly remembered corporal-punishing Hobbsie – subsequently voted down, overwhelmingly, in the horrified negative, by everyone else – had given a decided fillip to decidedly unhistoric home improvements. Nerida was not to know that she was contributing late zest, reinvigoration via fear, to a pre-existing phenomenon.

Housefront symmetry had become popular, creating a line of rectilinear faces with aluminium-rimmed eyes above flyscreened nose and mouth, the congruity offset by ten metre television aerials tucked jauntily behind one ear. A late trend – repositioning of the aerial at the midpoint of the roof ridge to attain absolute symmetry – had been initiated by the late, unorthodox Alec Meiklejohn.

Original timber was, if not routed, now in rapid retreat. Wayne Thorpe had secreted his entire timber cottage, including verandah, within a box of cream aluminium cladding, sealed under a pyramidal blue and white terra cotta tiled lid. Two slit windows faced the road with apparent deep suspicion. Thorpes embraced darkness as though in fond remembrance of the gloom of Derby, left behind generations before. Within his aluminium shell, Wayne was systematically removing all trace of organic material for deployment as winter fuel.

Only Nerida bucked the trend to modernity, stripping any feature she deemed inauthentic from the former home of Coral Caulfield. In Retired Miners Corner, the rigorous Humphries attempt to experience the weight of working class history via restoration of the Caulfield cottage to its original condition earned her the sobriquets “Mrs Greenie”, “Mrs Fucking Greenie Blow-In” and “Mrs Stuck Up Flaming Greenie Bitch”. Extra ‘Fuckings’ and ‘Flamings’ frequently appended to the titles. Nerida’s best endeavours at authenticity resulted in the house appearing more fraudulent by the day.

Alone, Ron Shipwater’s home weathered and fell apart, unpainted, without addition or alteration. Attempts to shame him into imposing his considerable personality upon the residence had long been abandoned.

Nerida and Herbert Hobbs both having ‘blown in’ at around the same time obliged Nerida, regularly, upon venturing outdoors, to deny involvement in a politically-undertoned love affair with the seconder of her ‘historic village proposal’. Let alone to exploring, as some suggested, a 1970s style retro threesome with Herbert and white-calico-clad wife Denise. In The Pit, it was generally agreed Nerida was the type. And it was true she had belatedly loosened up, in a 1970s mode, upon taking up residence in The Pit. Making up for lost time, the perspicacious concluded, as Nerida’s 1970s continued well into the new millennium. A number of male visitors, sandal-wearing, said to be fellow potters and sculptors, were seen overstaying and attending to odd jobs and heritage restoration in and around the Humphries cottage. It was said by some the aroma of illegal substance could be detected in the surrounding atmosphere. Others put this down to a particularly odoriferous Indonesian cigarette in vogue within artistic and counter cultural circles of a bygone decade.

Diagnosed late, given twelve to eighteen months, Nerida devoted her remaining time in this dimension to the creation of her own memorial headstone.

The content of wording on headstones Nerida also found subject to tight regulation. She had, at one stage, opted for a notably ribald passage from Rabelais on the subject of bodily functions as a summation of life, in the hope her commemoration might surprise those who thought her straight-laced. Especially her children. Should they visit. Which she doubted. Rightly. The scatalogical epitaph was to feature in parti-coloured ceramic lettering on an outsized marker shaped like a Norse runestone. Or gargantuan kipfler potato, with crude inscription, depending on point of view. Before rejection by the cemetery trust, Nerida had despatched photographs of the Rabelasian Runestone to whet her offsprings’ appetites for visiting her final resting place.

In situ, the finished article is, if not a thing of beauty, an object of curiosity. Locals determinedly instruct tourists not to miss The Thing. More than one visitor has been overheard to say “What on earth was she thinking?” The Thing, it must be noted, is compliant with regulations.

As soon as probate was granted, her children sold the cottage, as a weekender, to a middle-aged cafe owner and jetski rider from Sydney, for considerably more than their mother had paid for it.