Victory lies within our grasp.

The War On Nature has been prosecuted far more successfully than the War On Terror, The War On Poverty, The War On Drugs, The War On Waste, The Wars On Racism, Sexism, Genderism, Ableism, Ageism, Bodymorphism, Anything-Human-That-Other-Humans-Pick-On-ism, Etc-ism.

The War On Peace does show progress, thanks to a small number of dedicated terrorists, theocratic states, tribal dictatorships, and the occasional capitalist invasion, but total victory surely lies a long way off while billions of humans will persist in clinging to the dream of a peaceful life!

Whereas The War On Nature is but a tick’s dick short of Total Victory.

Everywhere post-animist humankind has populated, Nature is defeated. Enslaved when useful, decimated-to-exterminated when not. Utility to homo supremacisticus is all. We have been fruitful, increased in number, filled the earth, subdued it and achieved dominion over the fish of the sea, the birds of the heavens, the cows, pigs, sheep, and every creeping thing that creeps upon the earth, not to mention fruit, vegetables and sundry other life forms of less complex nervous systems. And we have in the main achieved our dominion effortlessly, via the production and consumption of Stuff.

Happily for us, Stuff kills! Making more room for more humans and more Stuff. Stuff is Our Principal Weapon in the War On Nature! All of our built environment, our industry, agriculture, and infrastructure, all our domestic Stuff – the house, car, boat, pool, furniture, appliances, clothing, toys, mower, 4-burner barbecue and leafblower – what it’s made of, where it’s made, how it’s made, how and where it gets into our hands – all of the above – follow the chain of carnage from raw material to finished, distributed product! – comes at the expense of other life. By way of habitat destruction and species dispersal, climate change, cultural behaviours, insensate machinery, pollution, disease, nets and fencing, guns and poisons, introduced predators, invasive plant species, genetic engineering and humanity’s outsized wheels.

No-one gets off the hook. Apart perhaps the abject poor languishing in some dustbowl of a failed state, or tribal hold-outs in a fast-diminishing jungle**, no-one has clean hands. Not me. Not you. Not them. Not even if we eschew ‘animal products’, vote Green, and flaunt a Stop Adani! bumper sticker

Of course, most if not all of us prefer not to acknowledge that the house, the car, our clothes, our screens, our coffee, hairdryers, high heels and hipster holidays, our life, killed other life.

Well, you wouldn’t want to acknowledge it, would you?

Stuff is the new opiate of the people.

But unless you and I live up a tree or in a cave, and forage for subsistence, we are footsoldiers in the War Against Nature.

Now. Is death by abattoir more immoral, more cruel than death by starvation, by dehydration, by being run over, by displacement and all the other means by which homo supremacisticus achieves dominion?

Because there does seem a very selective arithmetic is being deployed by certain evangelists and bourgeois finger-pointers in bestowing upon themselves the sanctity of “It’s them, not me.”

Ned Ludd Says: Responsibility demands we do our personal accountability sums comprehensively before accusing others of war crimes.

This week’s disheartening UN report declares that one million animal and plant species face extinction unless a “transformative change” occurs in human interaction with nature.

It’s all a bit hard to see this”transformative change” happening, isn’t it? Not without a meteor hitting. As Ned’s good friend M. de Balzac so pithily put it:

After poverty, how much comfort is too much? Wherever the line is, it’s not where it is now.

And if Ned sees another commercial featuring a 4 wheel drive demonstrating dominion over a pristine beach, churning across a stream, ploughing up a hillside, plants, rock and earth flying in every direction, he will be sorely tempted to call out the troops and by dark of night impose hammer-led Luddite dominion upon any and all morbidly-obese earth-trashing vehicles within range. And as for Jetskis..and trail bikes..and..

A Misanthrope Is What A Humanist Calls A Realist. 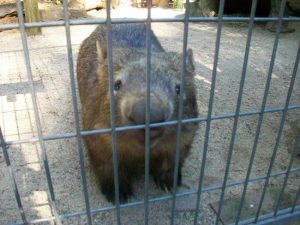