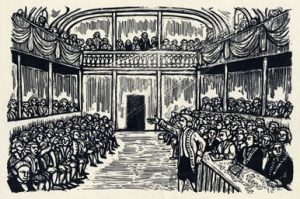 The Left – the genuine Left – that of socialism – has sadly vanished from local public discourse. Become the philosophy which dare not speak its name.

In its absence, the term left is now monstrously slandered in being appended to bourgeois liberals such as The Greens, ABC political commentators, local Guardian opinionistas and, very occasionally, commercial channel breakfast show guests. The false nomenclature is deployed both by liberalism’s enemies on the right, as a pejorative, and by liberals themselves, but as flattery: “I am so progressive, I must be left.”

Now let’s get this straight, once and for all.

Bourgeois liberals may be to the relative left of Tony Abbott, Alan Jones, and Heinrich Himmler, but more objectively, these moralising folk occupy a central position on the political axis. Fake Left? If you like.

The true left may have vanished but the position remains vacant.

The guilty parties in this terminological misuse, the lumpen-commentariat of the media, seem to lack even a basic knowledge of the political history from whence the terms left wing, right wing, centrist, derive. Perhaps these pundits were born post-1989 when, according to liberal historians and vested interests, history concluded, and our post-quartre-vingt-neufers are still living the dream. Or perhaps they simply cannot, or choose not to, read.

Moving from the badgers to the badged, linguistic deformation becomes even more monstrous, contradictory, and dangerous. Not content with moral finger-wagging – from a market share of around 10% or less – the bourgeois liberals – or Clayton’s left? – confound their  proclaimed missionary belief in freedom and equality by seeking to ban, banish, censor, de-platform, airbrush from history, talk over the top of, or drown out by squealing, any viewpoint contrary to their own, as heresy.

Diversity. But not in thought.

Historically, the Extreme Right and Extreme Left have proven dangerous.

The Extreme Centre is similarly menacing. And preposterous.